Founded Feb. 12. 1909, the NAACP is the nation’s oldest, largest and most widely recognized grassroots-based civil rights organization. Its more than half-million members and supporters throughout the United States and the world are the premier advocates for civil rights in their communities, campaigning for equal opportunity and conducting voter mobilization.

The NAACP was formed partly in response to the continuing horrific practice of lynching and the 1908 race riot in Springfield, the capital of Illinois and resting place of President Abraham Lincoln. Appalled at the violence that was committed against blacks, a group of white liberals that included Mary White Ovington and Oswald Garrison Villard, both the descendants of abolitionists, William English Walling and Dr. Henry Moscowitz issued a call for a meeting to discuss racial justice. Some 60 people, seven of whom were African 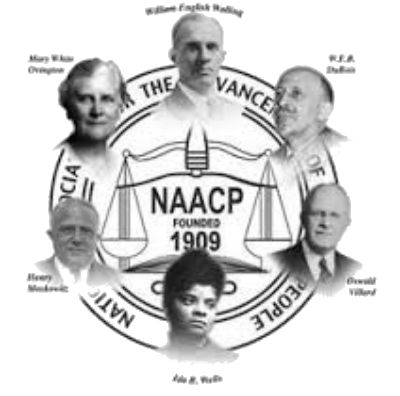 American (including W. E. B. Du Bois, Ida B. Wells-Barnett and Mary Church Terrell), signed the call, which was released on the centennial of Lincoln’s birth.

Echoing the focus of Du Bois’ Niagara Movement began in 1905, the NAACP’s stated goal was to secure for all people the rights guaranteed in the 13th, 14th, and 15th Amendments to the United States Constitution, which promised an end to slavery, the equal protection of the law, and universal adult male suffrage, respectively.

The NAACP’s principal objective is to ensure the political, educational, social and economic equality of minority group citizens of United States and eliminate race prejudice. The NAACP seeks to remove all barriers of racial discrimination through the democratic processes. The NAACP established its national office in New York City in 1910 and named a board of directors as well as a president, Moorfield Storey, a white constitutional lawyer and former president of the American Bar Association. The only African American among the organization’s executives, Du Bois was made director of publications and research and in 1910 established the official journal of the NAACP, The Crisis. 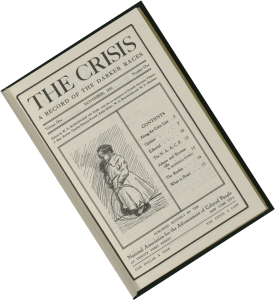 Du Bois founded The Crisis magazine as the premier crusading voice for civil rights. Today, The Crisis, one of the oldest black periodicals in America, continues this mission. A respected journal of thought, opinion and analysis, the magazine remains the official publication of the NAACP and is the NAACP’s articulate partner in the struggle for human rights for people of color. In time, The Crisis became a voice of the Harlem Renaissance, as Du Bois published works by Langston Hughes, Countee Cullen and other African American literary figures. The publication’s prominence would rise.

Now published quarterly, The Crisis is dedicated to being an open and honest forum for discussing critical issues confronting people of color, American society and the world in addition to highlighting the historical and cultural achievements of these diverse peoples.

In essays, interviews, in-depth reporting, etc., writers explore past and present issues concerning race and its impact on educational, economic, political, social, moral, and ethical issues. And, each issue is highlighted with a special section, “The NAACP Today” reporting the news and events of the NAACP on a local and national level.

With a strong emphasis on local organizing, by 1913 the NAACP had established branch offices in such cities as Boston, Massachusetts; Baltimore, Maryland; Kansas City, Missouri; Washington, D.C.; Detroit, Michigan; and St. Louis, Missouri.

Joel Spingarn, one of the NAACP founders, was a professor of literature and formulated much of the strategy that led to the growth of the organization. He was elected board chairman of the NAACP in 1915 and served as president from 1929-1939.

A series of early court battles, including a victory against a discriminatory Oklahoma law that regulated voting by means of a grandfather clause (Guinn v. United States, 1910), helped establish the NAACP’s importance as a legal advocate. The fledgling organization also learned to harness the power of publicity through its 1915 battle against D. W. Griffith’s inflammatory Birth of a Nation, a motion picture that perpetuated demeaning stereotypes of African Americans and glorified the Ku Klux Klan.

NAACP membership grew rapidly, from around 9,000 in 1917 to around 90,000 in 1919, with more than 300 local branches. Writer and diplomat James Weldon Johnson became the Association’s first black secretary in 1920, and Louis T. Wright, a surgeon, was named the first black chairman of its board of directors in 1934.

The NAACP waged a 30-year campaign against lynching,

among the Association’s top priorities. After early worries about its constitutionality, the NAACP strongly supported the federal Dyer Bill, which would have punished those who participated in or failed to prosecute lynch mobs. Though the bill would pass the U.S. House of Representatives, the Senate never passed the bill, or any other anti-lynching legislation. Most credit the resulting public debate-fueled by the NAACP report “Thirty Years of Lynching in the United States, 1889-1919”-with drastically decreasing the incidence of lynching.

Johnson stepped down as secretary in 1930 and was succeeded by Walter F. White. White was instrumental not only in his research on lynching (in part because, as a very fair-skinned African American, he had been able to infiltrate white groups), but also in his successful block of segregationist Judge John J. Parker’s nomination by President Herbert Hoover to the U.S. Supreme Court.

White presided over the NAACP’s most productive period of legal advocacy. In 1930 the association commissioned the Margold Report, which became the basis for the successful reversal of the separate-but-equal doctrine that had governed public facilities since 1896’s Plessy v. Ferguson. In 1935 White recruited Charles H. Houston as NAACP chief counsel. Houston was the Howard University law school dean whose strategy on school-segregation cases paved the way for his protégé Thurgood Marshall to prevail in 1954’s Brown v. Board of Education, the decision that overturned Plessy.

During the Great Depression of the 1930s, which was disproportionately disastrous for African Americans, the NAACP began to focus on economic justice. After years of tension with white labor unions, the Association cooperated with the newly formed Congress of Industrial Organizations in an effort to win jobs for black Americans. White, a friend and adviser to First Lady–and NAACP national board member–Eleanor Roosevelt, met with her often in attempts to convince President Franklin D. Roosevelt to outlaw job discrimination in the armed forces, defense industries and the agencies spawned by Roosevelt’s New Deal legislation.

Roosevelt ultimately agreed to open thousands of jobs to black workers when labor leader A. Philip Randolph, in collaboration with the NAACP, threatened a national March on Washington movement in 1941. President Roosevelt also agreed to set up a Fair Employment Practices Committee (FEPC) to ensure compliance.

Throughout the 1940s the NAACP saw enormous growth in membership, recording roughly 600,000 members by 1946. It continued to act as a legislative and legal advocate, pushing for a federal anti-lynching law and for an end to state-mandated segregation.

By the 1950s the NAACP Legal Defense and Educational Fund, headed by Marshall, secured the last of these goals through Brown v. Board of Education (1954), which outlawed segregation in public schools. The NAACP’s Washington, D.C., bureau, led by lobbyist Clarence M. Mitchell Jr., helped advance not only integration of the armed forces in 1948 but also passage of the Civil Rights Acts of 1957, 1964, and 1968, as well as the Voting Rights Act of 1965.

Despite such dramatic courtroom and congressional victories, the implementation of civil rights was a slow, painful, and oft times violent. The unsolved 1951 murder of Harry T. Moore, an NAACP field secretary in Florida whose home was bombed on Christmas night, and his wife was just one of many crimes of retribution against the NAACP and its staff and members. NAACP Mississippi Field Secretary Medgar Evers and his wife Myrlie also became high-profile targets for pro-segregationist violence and terrorism. In 1962, their home was firebombed and later Medgar was assassinated by a sniper in front of their residence following years of investigations into hostility against blacks and participation in non-violent demonstrations such as sit-ins to protest the persistence of Jim Crow segregation throughout the south.

Violence also met black children attempting to enter previously segregated schools in Little Rock, Arkansas, and other southern cities. Throughout the south many African Americans were still denied the right to register and vote.

The Civil Rights Movement of the 1950s and 1960s echoed the NAACP’s goals, but leaders such as Martin Luther King Jr., of the Southern Christian Leadership Conference, felt that direct action was needed to obtain them.

Although it was criticized for working exclusively within the system by pursuing legislative and judicial solutions, the NAACP did provide legal representation and aid to members of other protest groups over a sustained period of time. The NAACP even posted bail for hundreds of Freedom Riders in the ‘60s who had traveled to Mississippi to register black voters and challenge Jim Crow policies.

Led by Roy Wilkins, who succeeded Walter White as secretary in 1955, the NAACP, along with A. Philip Randolph, Bayard Rustin and other national organizations began to plan the 1963 March on Washington.

Assisting the NAACP throughout the years were many celebrities and leaders, including Sammy Davis Jr., Lena Horne, Jackie Robinson, Harry Belafonte, Ella Baker, an NAACP director of branches who stressed the importance of young people and women in the organization by recruiting members, raising money, and organizing local campaigns; Daisy Bates, NAACP national board member, Arkansas state conference president and advisor to the Little Rock Nine; and NAACP stalwarts like Kivie Kaplan, a businessman and philanthropist from Boston, who served as president of the NAACP from 1966 until 1975. He personally led nationwide NAACP Life Membership efforts and fought to keep African Americans away from illegal drugs.

CLOSE OF THE FIRST CENTURY

Wilkins retired as executive director in 1977 and was replaced by Benjamin L. Hooks, whose tenure included the Bakke case (1978), in which a California court outlawed several aspects of affirmative action. During his tenure the Memphis native is credited with implementing many NAACP programs 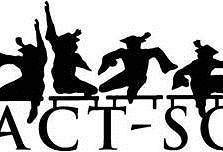 that continue today. The NAACP ACT-SO (Academic, Cultural, Technological and Scientific Olympics) competitions, a major youth talent and skill initiative, and Women in the NAACP began under his administration.

As millions of African Americans continued to be afflicted as urban poverty and crime increased, de facto racial segregation remained and job discrimination lingered throughout the United States, proving the need for continued NAACP advocacy and action.

Dr. Hooks served as executive director/chief executive officer (CEO) of the NAACP from 1977 to 1992. Benjamin F. Chavis (now Chavis Muhammad) became executive director/CEO in 1993, while in 1995 Myrlie Evers-Williams (widow of Medgar Evers) became the third woman to chair the NAACP, a position she held until 1998, succeeded by Chairman Emeritus Julian Bond.

In 1996 the NAACP National Board of Directors changed the executive director/CEO title to president and CEO when it selected Kweisi Mfume, a former congressman and head of the Congressional Black Caucus, to lead the body. The elected office of president was eliminated.

In May 2008, the NAACP National Board of Directors confirmed Benjamin Todd Jealous, a former community organizer, newspaper editor and Rhodes Scholar, as the 14th national executive of the esteemed organization.

Heading into the 21st century, the NAACP is focused on disparities in economics, health care, education, voter empowerment and the criminal justice system while also continuing its role as legal advocate for civil rights issues.

Yet the real story of the nation’s most significant civil rights organization lies in the hearts and minds of the people who would not stand idly by while the rights of America’s darker citizens were denied. From bold investigations of mob brutality, protests of mass murders, segregation and discrimination, to testimony before congressional committees on the vicious tactics used to bar African Americans from the ballot box, it was the talent and tenacity of NAACP members that saved lives and changed many negative aspects of American society.

While much of NAACP history is chronicled in books, articles, pamphlets and magazines, the true movement lies in the faces–the diverse multiracial army of ordinary women and men from every walk of life, race and class–united to awaken the consciousness of a people and a nation. The NAACP will remain vigilant in its mission until the promise of America is made real for all Americans.